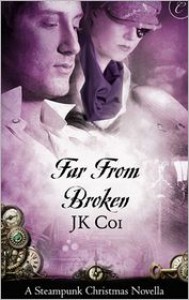 When Jasper's wife Callie is captured at tortured by his enemies she suffers horrific injuries and comes close to death. Jasper is desperate to keep his wife alive and agrees to life altering surgeries to keep her with him. When Callie wakes up to discover her eye, hand and legs have been replaced by mechanical equivalents she is horrified. Once a beautiful prima ballerina she now believes she is a monster and that she will never be able to dance again, she would rather have died in the attack than live the rest of her life with a body that isn't fully hers. Jasper is wracked with guilt for failing to protect Callie in the first place and because she hates what he allowed to be done to her. Can Callie come to terms with what happened and forgive Jasper for his part in it?

Far From Broken was a surprisingly dark story and one that had me hooked from the beginning. It was easy to relate to both of the main characters, Callie had been through a terrible ordeal not only at the hands of her torturers but also in the military hospital where her body was changed dramatically without her permission. Although her mechanical limbs kept her alive she wasn't sure if it was a life worth living and it took her time to come to terms with everything that had happened. Jasper will never forgive himself for the fact that she was tortuted because of him. If he wasn't a spy she wouldn't have been in danger and he feels he should have been at home to protect her. It was easy to feel both of their emotions and I was routing for them to work things out and find a way to move forwards together. Definitely a highly recommended read.
Tweet